You may be tempted to see the new movie about one of the fore-runners of impressionism,  the 19th century maritime British painter JMW Turner. It does have a stellar rotten tomato critic score of 98%, meaning all the critics loved it except the San Francisco Chronicle's Mick LaSalle who notes it's a "dull portrait."

He's not alone: the other rotten tomato statistic is that only 59% of actual people liked it. And that's not surveying random people who might lack your appreciation and fine taste  -  those are people who chose to watch this movie.

I was drawn to see it by the great reviews, and that Turner was so revolutionary - so innovative. I wanted to hear how he did it, how he created truly new art.

The movie is visually quite impressive, each scene feels like a painting being painted. And the sense of historical accuracy and period mood is strong and compelling.

But there is no story. It's more like a series of disjointedly connected vignettes from Turner's life. It helped that we had a couple laptops and could look up the other painters and events as we went along.

I was also thirsting for a little more insight into how revolutionary he was as a painter, the "innovation" side of the man and the artworld. That was almost entirely lacking, practically as if the writer and director didn't realize that is what makes Turner so fascinating.

Instead, there is a discomforting over-emphasis on what a disgusting man Turner was. Not just that he was the kind of physically ugly that painter Quentin Matsys celebrated, but that he was a grunty jerk, especially to women.

Overall, it's a visually engaging well-done historical piece, and if that's enough for you, have a good time. But if you want to be entertained or gain insight into the evolution of art, this is probably not your best choice.

Below: Turner's 1840 "Sun Setting Over a Lake" painting 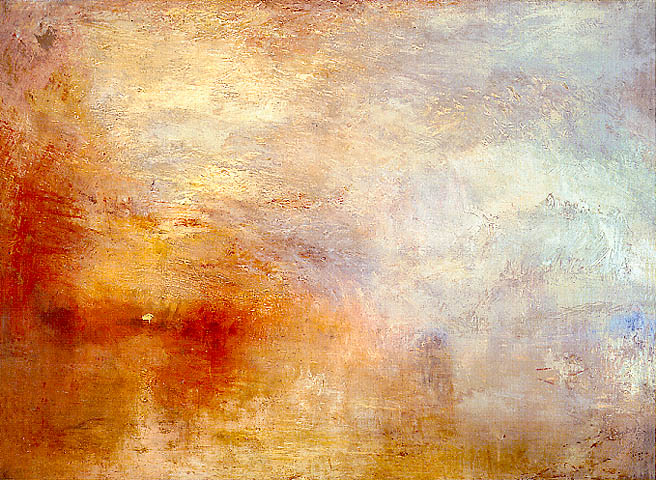